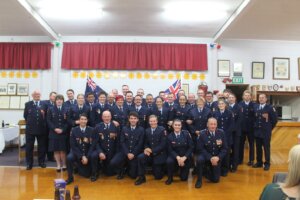 The atmosphere at the Te Awamutu Volunteer Fire Brigade inspires its firefighter of the year Lisa Atkinson.

She had visions of joining the police – but three years ago became a member of the Te Awamutu Volunteer Fire Brigade instead.

Lisa Atkinson wouldn’t have it any other way today.

The feeling is mutual – Lisa was named the brigade’s firefighter of the year when the brigade held an award night covering the last two years.

And Helen Wilkes was also celebrating – she won the Firefighter Excellence Award.

When she joined the brigade Lisa was one of five female firefighters – today there are a dozen.

The mum of three, who was born in Te Awamutu, says her award was a “massive honour”.

The brigade now has about 44 members, and Lisa says the atmosphere there “is why I do it”.

“Everyone has my back – behind the scenes there is core group of officers who put in timeless hours to support us,” she says. 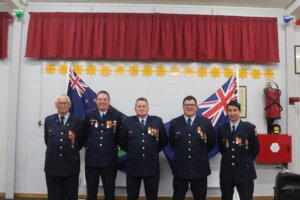 The Te Awamutu brigade is now “almost like family”.

Lisa’s first call out was to a car fire. Thankfully it was only the car which was damaged, but she will never forget the call. Every fire call involved a loss of some type which impacted on people, she said.

“I personally have ways of dealing with that – and we get support too. There is no shame in asking for help, and we run great debriefs.”

Lisa and husband Blair are in the construction business with Gibson Construction in Te Awamutu.

She says she would encourage any woman interested in firefighting to consider joining the Te Awamutu brigade …“and any men too”.