The shooting of George Gilfillan 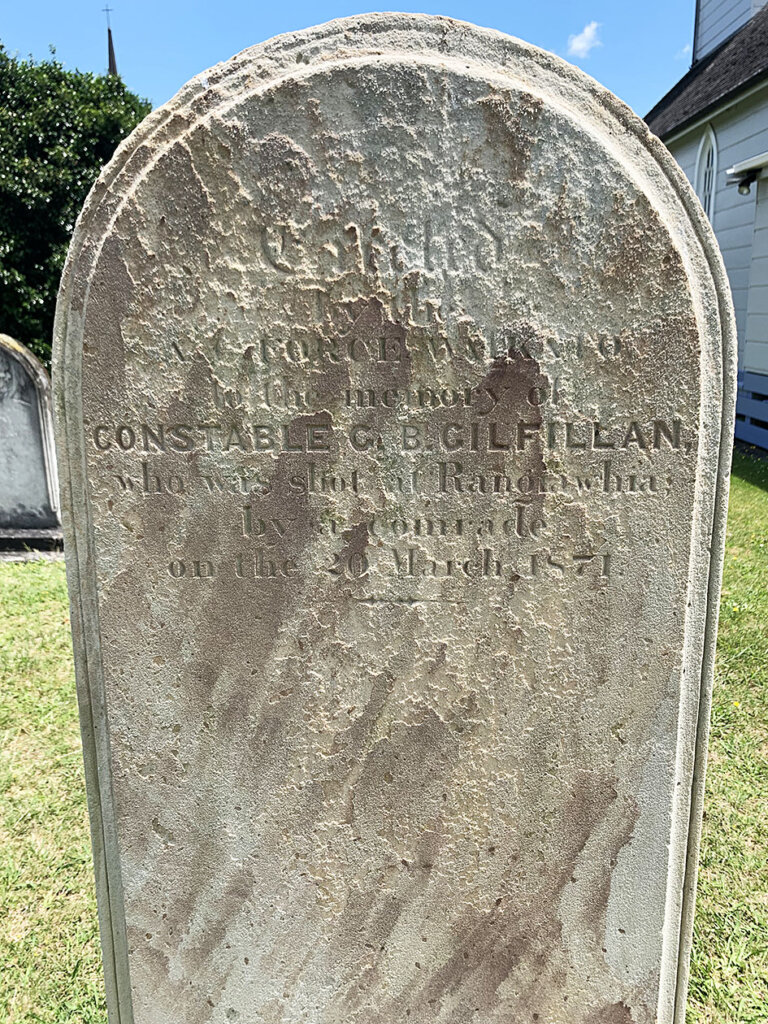 It may sound ghoulish, but a walk around graveyards can provide hours of mystery leading to the need for more research.

The wording on a headstone in the grounds of the Old St John’s Church in Te Awamutu is fading but the words Constable G.B. Gilfillan can still be seen.

The words after that –  “who was shot at Rangiawhia (Rangiaowhia) by a comrade on the 20 March, 1871” are less obvious.

So what happened to Constable Gilfillan?

According to a report in the New Zealand Herald on June 13, 1871 from the wilful murder trial of Thomas Pollok Muirhead at the Supreme Court in Auckland, George Bond Gilfillan and Muirhead, a fellow constable, were helping to load a dray in front of the blockhouse at Rangiaowhia.

Witness George Scholfield, also a constable, said he was at the dray when he heard a shot fired from inside.

Muirhead came out of the blockhouse with a musket in his hand and said: “I have done for him now; the traitor could not live.”

Scholfield rushed inside to find a bleeding Gilfillan kneeling on the floor with his hands to his left breast. Scholfield carried him to the guard bed with the assistance of another constable and cut open his shirt and waistcoat. The musket ball had passed out through his back.

Muirhead was arrested and an inquest was heard the following day.

At the trial, evidence was heard that he was a heavy drinker and that he had been drinking and hallucinating the night before. Gilfillan, who had studied medicine, gave him 30 drops of laudanum (opium).

The next day Muirhead helped gather mushrooms before returning to shoot Gilfillan.

Muirhead was found guilty and condemned to death. A successful petition signed by many people in the district asked that his sentence be commuted to life imprisonment.

What other mysteries lie in the grounds of old St John’s Church? Photo: Mary Anne Gill